What an amazing article!

One of the great things about being a scientist is I’m exposed to amazing and awesome things. Every. Single. Day. Sometimes I am astonished by Nature itself, and other days I am amazed by our ingenuity and abilities as we come of age in the Cosmos. Today was one of those days.

The first picture of the Moon and Earth together in space, taken by Voyager 1.

This story has its origins long ago. On 5 September 1977 we hucked a 722 kg spacecraft into the sky, named Voyager 1. That was the last time any of us ever saw Voyager 1 with our own eyes. But Voyager has been on a 37-year journey to act as our eyes in the Solar System. On 18 September 1977, barely 13 days after launch, when it was 7.25 million miles from Earth, Voyager sent home the first picture ever

Possibly the very first tale we could class as speculative fiction is the Sumerian poem, the “Epic of Gilgamesh”, dating from 1800 BCE. It tells of Gilgamesh, a king and valiant hero, who defied the gods to seek eternal life. So perfect, brave and skilful was he that he should have been a god himself yet immortality is a prize the gods awarded him only after death. And it wasn’t for his heroic prowess but rather three lessons learnt in life: how to be both a fair ruler and a good person, how to honour the gods in life and why all human beings must die.

After Gilgamesh, heroes like Heracles and Achilles tended to spring fully formed from the mould, perfect except for a single flaw which would inevitably cause their downfall. That fatal flaw came to be what defined the tragic hero, like the grain of sand that spurs the oyster to produce its pearl, engendering such heroes as Oedipus, doomed from birth.

In yesteryear, fantasy writers from Tolkien to Robert E. Howard (creator of Conan the Barbarian) tended to imbue their heroes with a godlike perfection. But the gods have never been perfect and therein lies their attraction: Zeus was a womaniser; Hera a jealous wife; Aphrodite, Ares and Hephaestus all made silly mistakes and got ensnared in childish squabbles. It was their very humanity and flaws which made them such attractive role models for the Greeks. The most interesting characters in early speculative fiction echo this, for example the selfish Eustace in C.S. Lewis’s The Voyage of the Dawn Treader, or Bilbo’s and Frodo’s growing covetousness in The Lord of the Rings. As they overcome their faults, they provide a moral path to follow.

The original book covers for The Lord of the Rings, which Tolkien designed himself.

Yet through their ‘damaged’ nature, they also become more attractive, somehow closer to us. Why does club-foot Hephaestus seem more human than the perfectly formed Ares? Is it because we can imagine saving them, the saviour saved? Whatever the reason, it is a growing trend in most genre writing – one almost obligatory in the detective genre – to offer up a ‘damaged’ hero. Ideal modern heroes must now be thoroughly battle-scarred by life: a good detective should be divorced and alcoholic; a dragon slayer requires a coterie of internal demons to be truly effective. The more wallowing in one’s failings the better, as Stephan Donaldson’s The Chronicles of Thomas Covenant shows so admirably. Most modern genre writing has now adopted this rule of thumb. 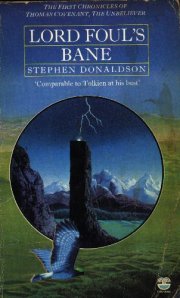 Unfortunately this has led to some shoddy characterisation, with heroes baring their flaws quite unashamedly at the drop of a sabre. What used to be depicted as ironically tragic too often becomes prosaic and predictable, devoid of even the slightest pinch of storytelling suspense. How to avoid this?

Speculative fiction follows a fairly closed set of genre rules: writers break them at their peril. Modern-day heroes still require that primal flaw if we are to embrace them. Yet now more than ever, genres are interbreeding with rabbit-like velocity, so steam-punk dystopian dinosaur romance might still hold a few surprises up its sleeve when defining its heroes. Does the answer lie in more complex characterisation? Probably not. Genre fiction must be fast-paced and plot-based to succeed. Complex characters simply hold up the action.

The key is to define that fatal flaw when outlining the central conflict, prior even to defining the story. The Oedipus myth is a masterful example: in order to thwart a prophecy that he will kill his father and marry his mother, baby Oedipus is exiled; he is adopted and grows to manhood; on learning of the prophecy, he leaves his home to avoid this fate, which brings him into contact with his real father and mother, with whom he fulfils the prophecy. So he is fatally flawed at birth and this flaw directly defines the plot and seals his fate.

It is a massive challenge to interweave plot and characterisation so simply and effectively, yet the writer who can do so is on to a winner.

When I started to write “The Jewel Fish Chronicles”, I was clear about one thing: I wanted to avoid using overt Eurocentric mythology such as black-clad witches waving wands, or Celtic-inspired faery folk. It isn’t that I don’t like fantasy that uses these archetypes, but most fantasy is a reworking of this Western cultural bias, and I was hoping to reach out to readers of all cultures and regions. Through the Whirlpool is clearly inspired in ocean-going and Pacific cultures. Nevertheless, I couldn’t help but pay tribute to my favourite authors. So looking back on my writing, I see glimmerings of Tolkien, the Pern dragon-riders and Dune, which have crept in unbidden.

For this post I thought I’d look around to see what other examples I could find of fantasy fiction that is not Medievalist or Eurocentric. The following are some of the books I’ve been able to add to my reading list.

Nalo Hopkinson’s Caribbean-Vodoun-inspired Brown Girl in the Ring is set in a ghettoised Toronto of the future. At first sight this novel appears to embrace a sci-fi dystopian scenario until Ti-Jeanne’s visions link the plot to the spirit realm.

Orson Scott Card, in his “The Tales of Alvin Maker” series, describes an alternative colonial America divided into smaller kingdoms and colonies, in which “black”, “red” and “white” races have differing magical influences.

Barry Hughart has written three books under the series title “The Chronicles of Master Li and Number Ten Ox”, in an ironic detective vein. They concern the ancient sage and scholar Li Kao, narrated by a Sancho-Panza-type character, Number Ten Ox, and are set in a world inspired by Chinese mythology, both real and imaginary.

Stephen King, in his “Dark Tower” series, explores the genre of the western, but with a strong blend of fantasy and horror. His protagonist Roland is inspired by the 1855 poem “Childe Rowland to the Dark Tower Came” by Robert Browning.

Boy’s Life by Robert R McCammon is set in Zephyr, Alabama, a place where monsters and fantasy figures populate the imagination of eleven-year-old Cory Mackenson, until his father undergoes a traumatic experience and they become real.

These are just a few of the many works which I’m sure are out there. I’m keen to uncover more examples so please add suggestions in the comments section.

Remember that Through the Whirlpool is now free at Smashwords and Kobo. You can pre-order Twilight Crosser before its launch on 15 November 2013 at both Kobo and Smashwords.

Fantasy and science fiction are two popular genres which closely overlap – at least from a lay perspective. They share many elements yet nurture loyal groups of readers who sometimes refuse to enter the opposing camp. So are they that different?

Both genres of writing fall under the umbrella of speculative fiction, operating on their own carefully thought-out inner logic, using invented worlds as a metaphor for our own, or exploring some sort of utopian ideal. They tend to conform to archetypal characterisation of hero, heroine, villain, sidekick, etc. Wikipedia says of science fiction: “its imaginary elements are largely possible within scientifically established or scientifically postulated laws of nature”; and it is often set in the future. Fantasy, according to the same source, “commonly uses magic and other supernatural phenomena as a primary plot element, theme, or setting”. Fantasy should still use such elements rationally in a structural sense; otherwise the reader’s belief will falter.

While fantasy revels in the use of unscientific and unexplained powers or “magic”, science fiction takes pains to describe the nuts and bolts behind the fantastic. The difference seems to be in the degree to which the author attempts to justify such elements. One seems to tweak our emotional strings, and the other, our intellectual ones. So there may be a subtle right-brain/left-brain divergence between fantasy and science fiction readers, though most of us, myself included, enjoy reading both genres.

The original cover to AnneMcCaffrey’s Dragonflight, first published by Ballantine Books in 1968

Can books cross these genres? Anne McCaffrey’s “Dragonriders of Pern” series appears to, conjuring up a world of dragons that communicate telepathically with their human riders. The stories are Medievalist, of the kind favoured by much Eurocentric fantasy writing since Tolkien. Yet scientific explanations are uncovered concerning the founding of Pern and everything within it. It turns out that these “dragons” are a species that was genetically manipulated by Pern’s early human settlers as a defence against the alien “thread” that invades the planet periodically. So, however fantastic, little or no actual magic appears.

Fantasy seems to hark back to a golden romantic past, an age of chivalry and pure ideals, while science fiction uses similar scenarios to speculate on the future. In the Pern books, the rationally explained, technological future turns out to form part of a golden past.

Through the Whirlpool, first book in “The Jewel Fish Chronicles”, available as an e-book on 23 May 2013

Both fantasy and science fiction provide a metaphor on the real world. When I started to write “The Jewel Fish Chronicles”, I wanted to straddle two genres, fantasy and realism, and tried to apply a certain scientific craft to the use of magic. I aimed to move from fantasy towards reality as opposed to the simple escapism of so much fantasy writing. Yet now having considered this question, I wonder whether the “supernatural phenomena” I introduce, such as crossing the frontier between life and death, and the water “magic” wielded by the Shahee sea nomads are not rather unexplained “science”, which Jade and other characters are simply not advanced enough to understand? If so, I am really writing science fiction. I think I’ll wait and see what the characters reveal.

Bees on My Roof

Diary of a novice London beekeeper

Personl Growth, Relationships and Being an Adult from a Christian perspective

Nail Your Novel - Writing, publishing and self-publishing advice from a bestselling ghostwriter and book doctor

A blog full of humorous and poignant observations.

for a love of language

A celebration of linguistic creativity

Learning languages and connecting with others.